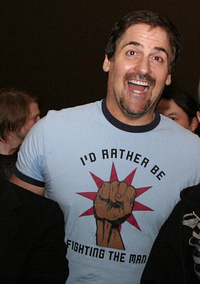 Keep an eye on this unfolding story about Cuban using insider information to avoid $750,000 in losses.

According to Forbes Magazine, Dallas Mavericks owner Mark Cuban is one of the richest people in the world, with a net worth at $2.3 billion as of March 2007. Besides the Mavericks, Cuban owns the HDNet cable television channel, Landmark Theaters, a large national chain, and (ironically) a Web site called Sharesleuth.com, which bills itself as providing “independent Web-based reporting aimed at exposing securities fraud and corporate chicanery.”

Considering that Mark Cuban is a celebrity and a high profile billionaire, I’m sure the SEC did its homework twice before filing charges, especially given that the alleged infraction took place June 28, 2004.

If guilty, do you think they’ll put Mark Cuban in the same cell with ex-NBA referee, Tim Donahy as part of the punishment for both of them?

If fined, do you think Cuban will continue his tradition of matching the amount he pays in fines with a donations to charity?

Seriously though, this is not a good day for Mark, or for anyone for that matter. And by the way, the SEC charges are in civil court, not criminal. I hope Cuban is innocent. Unfortunately though, the charges are somewhat believable.

I remember when Dirk Nowitzki won the 3-point shootout in Houston in February of 2006, Dirk actually stood on the line and some of his makes should have been disqualified. Had the refs done their jobs, Dirk would not have won, but Cuban didn’t complain to the league office that time.

Cuban is an opportunist: Mark Cuban does whatever benefits Mark Cuban’s interests, and he has a history of seizing every advantage he can get for himself. Hopefully, he knew better than to do what the SEC thinks he’s done.

The Wall Street Journal updated their article from when I originally linked to it, and added more detail.

Cuban and his attorney launched into a vicious public tirade against the SEC, saying among other things that the SEC should be too busy with its bigger problems to worry about Cuban’s little $750,000 transaction.

Does that response smell funny to you? Because it sure does to me.

The article also added a quote from Mark Cuban’s blog, posted on March 2, 2005, nearly a year after the stock sale.

Mr. Cuban wrote, “the company did a PIPE financing. I’m not going to discuss the good or bad of PIPE financing other than to say that to me its a huge red flag and I don’t want to own stock in companies that use this method of financing. Why? Because I don’t like the idea of selling in a private placement, stock for less than the market price, and then to make matters worse, pushing the price lower with the issuance of warrants. So I sold the stock.”

Obviously, this blog entry is a written confession of guilt. Cuban clearly says that the reason he sold was because of the PIPE financing, which explains why Cuban’s defense isn’t that he didn’t get inside information prior to selling, but that he was never told the insider information was confidential.

That is so unlikely and weak that it should make most people laugh out loud.

Besides, Cuban confesses that he knew it was a confidential call when he describes it as selling stock in a “private placement.”

Hey Mark, private placement means the public won’t be notified until after the deal is done… so like it or not, you ARE an investor who made a trade based on information the public wasn’t privy to, information given to you by an insider. That is pretty much the definition of insider trading, and you confessed to it in your own blog.

Rather than placing your bet on semantics and vilifying the SEC, you ought to stop with the tantrum and get on their good side so you can cut a deal, because this civil suit, its legal costs, fines and restitution is going to cost you much more than $750,000. Best to pull a mea culpa and part with a million and try to make do with the remaining $2.3 billion you’ll have left.

How the Lakers can beat the Thunder