Home / Articles / China Fires One Over the Stern

China Fires One Over the Stern 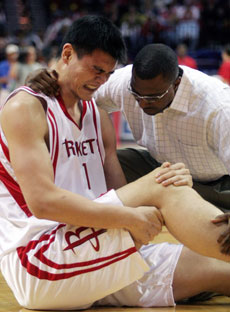 — Who is to blame for Yao’s injuries?

I can’t speak for the other planets, but Ballerblogger.com is the best 1-stop place for NBA basketball on our world’s world wide web, and today they posted an interesting quote from China’s state-run media:

“A commentary in the Communist Party-run People’s Daily dismissed the widely-held view in the United States that Yao’s repeated injuries stemmed from training with China’s national team during the NBA off-season.

“It can only be said that the NBA game has worn Yao Ming out,” the paper fired back.

“The physical beating taken by every player due to the long season, the high level of match play and the endless travel cannot be overlooked.

“The NBA should consider changing its match scheduling from the standpoint of safeguarding players.”

— Does China have a point?

Now I am one of the last people on earth who would side with a communist-run newspaper. In fact, I stopped buying my favorite computers in the world, IBM Thinkpads, when IBM sold the line to Chinese run Lenovo, because I didn’t want my dollars going to support an ideology I do not believe is good for us.

Neverthless, the communist-run Chinese media is 100% right, and are saying something that has already been a topic of hot debate in the United States for years.

The reality is the NBA treats its players like tires on a sports car: it rides them hard and fast, then tosses them aside, and it does it because the fans pay them to.”

The NBA kills the golden geese to get the eggs, but they are okay with that because there is always another draft of geese eager to take their place — and now international players are flocking to the draft as well.

— Does defense win championships? Or luck?

Basketball is a very physically and emotionally demanding sport. Heck, at the end of some games, even the FANS are exhausted!

Every season attrition plays as big a role as anything else in determining who becomes an NBA champion, as every season championship contending teams are knocked out of contention thanks to an injury to a key player.

Los Angeles Lakers fans contend that in the 2008 NBA Finals, the Boston Celtics benefited greatly thanks to injuries to Andrew Bynum and Trevor Ariza. Many dismissed that as sour grapes, but then the next season the Lakers seemed to bear that out by sweeping the Celtics in the regular season. With all Celtic players healthy and accounted for, the Lakers beat them in Boston 92 to 83 on Christmas day 2008. And then on February 5, 2009, the Lakers beat the Celtics again, and this time they did it without Andrew Bynum who was out injured again.

Then it was Boston’s turn to deal with injury. In fact, in the 2008-2009 season, all the Celtics’ starting 5 missed games, 40 man games in all, with 25 of those missed games belonging to Kevin Garnett. With the emergence of Rajan Rondo, it seems likely that a healthy Boston would have easily defeated the Orlando Magic in the Eastern Conference Semi-Finals. Instead, with key players on the bench in street clothes, the Celtics fell to the Magic in 7 games.

Likewise in the West, the always contending San Antonio Spurs had similar struggles. Tony Parker lost 10 games, Tim Duncan was out 7 games (and played hurt for more), and Manu Ginobli missed a whopping 38 games due to injury. That obviously affected the Spurs regular season record, playoff seeding and championship hopes.

If you are tempted to argue that injuries happen and maybe these key players would have been out in a shorter season anyway, you are missing the point.

The Chinese said, “The NBA should consider changing its match scheduling from the standpoint of safeguarding players.”

Changing the schedule, including putting more space between games, would certainly reduce the role injuries play in determining NBA champions.

And championships should be determined by teams, not by luck. That’s not basketball, that’s Yahtzee.

That altering the regular season playing schedule is EXACTLY what the Phoenix Suns did with aging superstar Shaquille O’Neal.

The Suns played Shaq in only 72 games and made him sit out 10 games at strategic times of the season so that he could rest and recover from the rigors of NBA play and travel.

Even his free throw percentage got better.

And before you try to dismiss those stats by claiming the Suns have a different system than the Heat, those stats I just quoted have been adjusted to account for only for Shaq’s games with the Phoenix Suns.

Without a doubt, altering the NBA season would NOT eliminate injuries, but it would positively affect how large a role injuries play in determining NBA championships.

What is more, getting a 72 game season is easier than you might imagine.

That is a 12% reduction in games, which will result in a reduction of revenue for the NBA. However, expenses are also reduced, so that has to be accounted for. Also, it would be a mistake to assume 12% less games means 12% less revenue, because while ticket sales and television revenue would be reduced, other income sources would not such as merchandising. People will still buy Kobe Bryant jerseys even if he is playing 72 games a year instead of 82.

So, here’s the big question: Would the NBA curb its lust for money by 10% or so to keep the likes of Yao Ming, Shaquille O’Neal and Manu Ginobli in the game, and to allow better teams to excel rather than just younger teams?

Probably not, so here’s another idea.

The money lost by reducing regular season games can be made up and more by having a qualifier round just prior to the playoffs.

Right now the system the NBA uses to determine who qualifies for the playoffs is Byzantine and (frankly) idiotic.

For example, the NBA is divided into 2 Conferences: Eastern and Western. Each conference is then divided into 3 divisions — which are totally meaningless. Winning each division doesn’t mean much in terms of seeding, because in 2006 that rule was tweaked to favor teams with better records anyway.

If having divisions doesn’t mean anything, why have them?

Another problem with the playoffs is that many of the teams that earned a spot in the playoffs aren’t given one because they happen to be in a tougher conference.

For example, in the 2008 playoffs, all 8 teams in the Western Conference playoffs had 50 or more wins, while only 3 Eastern Conference teams had 50+ wins… and 3 others didn’t even have winning records. That’s messed up.

So, give the first 6 seeds of each conference to the teams with the best records in each conference, and then let the next 8 teams in terms of regular season wins, regardless of conference, play for the 4 wild card spots in a playoffs qualifier round in a best of 3 or best of five qualifier series.

The buzz of the qualifier round will sell more tickets and television spots than regular season games, thus making up the revenue lost by cutting the regular season by 10 games, PLUS…

Plus the qualifier round will give the playoff teams a week or so to rest from the regular season and heal up for the playoffs.

— The moral of the story?

(1) Reducing the regular season to 72 games,

(2) Eliminating back to back games and spacing the schedule better, and

Unfortunately, these great reforms, while they may have support in China, will likely never see the light of day in David Stern’s NBA will they?

That’s too bad, because the really NBA treat its players like tires on a sports car: riding them hard and fast, then tossing them aside, and there is a better way.

In baseball, there are rules for how many innings (or pitches?) a pitcher can pitch in a given time period. These rules exist to protect the health of the players.

Why not do something similar in the NBA?

Why not set up a set of rules that limit how many minutes a player can play in a week, and set how much rest teams should have between games?

Again, the president already exists in professional sports, so this isn’t a radical idea at all.

While I’m sure the minutes take their toll, I’m also confident that it is the inadequate rest for recovery that plays a big part in wearing down players and making them susceptible to injury. That is really where the NBA needs the most reform on this matter.

Back in the day when college players could compete for the USA in international play, the NBA’s off season may have been adequate in terms of rest.

Times have changed though, international competition has grown up, and TeamUSA demands commitments from NBA elite.

Today it is Yao that is injuried, but soon it could be LeBron, Kobe, or Dwight whose year ’round commitment for high level basketball threatens to derail a team’s championship aspirations for a season… or even a player’s career.

And when they come back, who is to say they will be the same player? There have been plenty of NBA players who never were the same after an injury.

That’s where I really admire the Phoenix Suns: they would rather risk a mid season loss than a player’s health.

If the league could have the same priorities and the same discipline, then perhaps there wouldn’t be so much worry that (for example) Pau Gasol will be playing for Spain in a European tournament just prior to the NBA preseason.

The bottom line is that most fans, if not all fans, wouldn’t even notice a season shortened by 10 games.

On the other hand, all fans notice when the star players from their teams are out injured.

If this work hazard for missed time, and potentially career ending injury existed in other industries other than professional sports, people would get behind the reforms in a blink.