Home / Articles / If I were Phil Jackson…

If I were Phil Jackson… 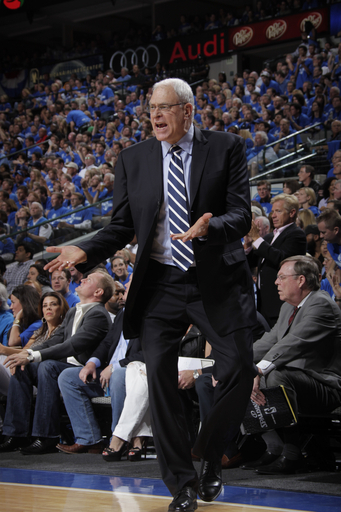 If I were Phil Jackson and didn’t want to end my coaching career with a sweep, I would consider ideas like these.

Phil, it is time to try something new, something more effective. After all, ineffective play + ineffective coaching does NOT equal success.

Besides, blaming these 3 losses on Pau is so simplistic it is more scapegoating than analysis. The Lakers are killing the Mavericks in points in the paint. Also, the Lakers have grabbed 51.4% of all the rebounds this series… for all their woes, the Lakers bigs are still outperforming the Mavericks bigs.

And especially in game 3, the Lakers were failing the team from the 3 point line — both offensively and defensively. For example, so far this series the Lakers are 1 of 10 on corners 3s, and 9 of 42 everywhere else behind the arc.

The Lakers bench is a let down too — perhaps more so than Pau, so let’s keep it real and not make Pau the sole scapegoat.

If I were Phil Jackson, I would have Lakers staff prepare DVDs of Pau Gasol highlights, such as:

Let Pau see himself again and again as effective, including effective against the Mavericks. Make him watch the videos again and again to drive home the realization of the fact that Pau Gasol is a great player.

As Pau Gasol becomes effective again, Dirk’s offensive game will likely suffer some collateral damage as, for the first time this series, Dirk will actually have to expend energy on defense.

Sometimes criticism sparks a player or a team, but if it is overused, it just sucks the life out them.

If you have access to video of game 3, watch the fourth quarter again. I was amazed that even when the Lakers had an 8 point lead, their body language looked as if they were getting spanked. They were just minutes away from (presumably) beating the Mavericks in Dallas, yet the Lakers had no swagger. There was no joy in their faces, no bounce in their step over having a late advantage on the Mavs.

Instead, even with a lead, the Lakers in the 4th quarter constantly hung their heads over every Maverick basket, and just trotted down the court… their body language said anything but “we are winners.”

It seriously looked as if the life had been sucked out of Lakers due to their being so intensely negative all game long, leaving them mentally weary and defeated long before the score said they were.

Television analysts keep pointing out that Mavericks are killing the Lakers in the 4th quarter, however the Lakers have yet to win a 1st quarter as well in this series. And strangely, the Lakers own the Mavericks in the 2nd quarter. Check it out:

Isn’t it striking that the Lakers’ have basically the same pattern for every game this series against the Mavericks:

Q1: Start slowly
Q2: Get a strong advantage
Q3: Play on cruise control
Q4: Run out of gas and lose

What contributes to this pattern?

Well, in game 1 I’m sure it was because the Lakers took the Mavericks for granted and started playing blasé ball.

However, with 3 straight games in this pattern, here is another here is another intriguing tidbit: in every game this series Kobe Bryant sits more in the 4th quarter than any other quarter.

Seeing as the Lakers struggle mightily to score in the 4th quarters, scoring just 16, 19 and 20 points in the 4th quarters of each of the games so far, I’d consider sitting Kobe at the end of the 3rd rather than the beginning of the 4th.

It might not matter at all, but bringing Kobe in cold when all other players have been running for the last 6 minutes may not be the best way to get his rhythm going again in crunch time, which has been another problem in this series.

Television analysts have been making a big deal about the Mavericks bench outscoring the Lakers bench 112-52 in these 3 games, however that is misleading.

First, the Mavs bench has played 81 more minutes than the Lakers bench, so of course they are going to have more points. (Of course, the reason they may be playing more is because they are more productive — the classic chicken or egg conundrum.)

Second, the Lakers own the Mavericks in the 2nd period: precisely the period when the Lakers are playing their bench. That makes sense when you consider Phil Jackson like to mix bench players with starters, and there is some deferring happening.

Add those two together and you get the feeling that rather than continuing to use the substitution pattern the Lakers have been using in the 2nd half, they would be better off doing something closer to what they do in the 1st half, when the Lakers dominate the 2nd quarter.

In game 2, Steve Blake’s 2nd half play was a disaster for the Lakers. As announcer Steve Kerr pointed out during the game with 2:50 left in the 3rd quarter, in one possession Blake almost turned the ball over twice, and missed two 3-pointers. Before the quarter ended Blake did turn over the ball, while letting JJ Barea and Jason Terry have their way on the other end of the court.

Had Jackson played Blake more 1st half minutes, he would have more easily seen that was not Blake’s day.

So I would like to see the bench log a few more minutes in the first half and prove themselves for 2nd half minute consideration.

Additionally, I would definitely think about starting Lamar Odom and bringing Pau off the bench. Thanks to all of Andrew Bynum‘s injuries these last few years, Pau has had to play center so often that he seems to easily lost anyway when he is on the floor with Bynum.

Plus, I think Pau would benefit by starting the game on the bench and observing Dirk and the Dallas game plan.

Kevin McHale once said that he loved coming off the bench. He would come in fresh and post up players just as they were winded and beginning to play defense with their hands instead of their feet, and what is better, the team would be in the penalty so McHale would be going to the foul line.

Pau, assuming his confidence could take the role change in stride, could really benefit from a sixth man role, and less time playing on the floor with Andrew Bynum.

The great philosopher, Kobe Bryant, once said, “To make history, you have to do historic things.”

Certainly coming back from a 0-3 deficit would be historic. The problem is, getting swept after winning back to back championships would also be historic.