Home / Articles / Fire John Paxson while you are at it

Fire John Paxson while you are at it

Chicago Bulls owner, Jerry Reinsdorf, once served on the Board of Directors of the now bankrupt and defunct Lehman Brothers, and is the recipient of the 2009 Sports Lawyers Award of Excellence.

Neither of those distinctions makes me feel warm and fuzzy inside…

But the builder of the James Jordan Boy’s and Girls Club and Family Life Center would be doing Chicago, the NBA, and sports itself another favor if he would fire Bulls vice president of basketball operations John Paxson. 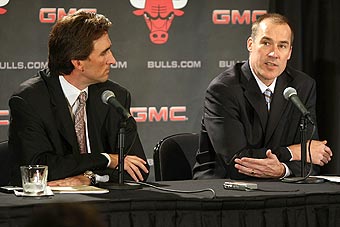 By all appearances John Paxson has the basketball IQ of a Brussel sprout, and the management ability of Dilbert’s pointy haired boss — on steroids (with ‘roid rage).

By now you know about the Yahoo! Sports report of the altercation between John Paxson and Vinny Del Negro.

“Sources said Paxson first grabbed a hold of Del Negro’s tie and seemingly tried to provoke him with two successive jabs into his chest. Paxson was even heard to angrily challenge Del Negro to a fight.

“There were several staff members present, sources said, and assistant coach Bernie Bickerstaff stepped between Paxson and Del Negro and pulled Paxson away.

“Sources said Del Negro did not retaliate, mostly out of fear the incident could be used to void his contract without pay or hurt future career opportunities elsewhere.”

As shocking as this incident may be, Bulls fans know all too well that it is in reality  just yet another of John Paxson’s poor decisions since leaving broadcasting to take the reins of Reinsdorf’s team.

From the beginning, Vinny Del Negro, who had NO experience as a head coach at ANY level of basketball, seemed to have been hired to be fired when the Bulls could finally lure a name brand head coach.

Del Negro’s lack of experience was painfully evident, causing fans and basketball analysts alike to regard Del Negro as a “dead man walking” in his job almost from the moment the press conference announcing his hire had closed.

Del Negro had plenty of stumbles, such as blowing a 35 point lead at home and losing to the lowly Sacramento Kings this season, but considering injuries to Derrick Rose and Joakim Noah, many were surprised by what Del Negro was able to accomplish.

Del Negro would make a fine assistant somewhere and would probably be a solid head coach prospect again in the future with more seasoning.

The Bulls on the other hand, look like slime balls. The Bulls’ front office have disgraced their organization with their despicable treatment of their previous head coach, and all coaching prospects know it.

Consequently, the best thing the Bulls can do now to attract a name brand coach is to fire John Paxson.

Some coaching candidates, such as Larry Brown, might find wearing the GM and Head Coaching hat a bonus.

Meanwhile, the Bulls would be well advised to not look to another rookie coach, such as Mark Jackson, to replace Del Negro.

Maybe Vinny Del Negro should have been fired, but he should not have been treated the way he was while he was Chicago’s head coach.

From what we can see, for two years Vinny conducted himself with class and did his best in the Bulls’ purgatory. Maybe he proved himself a mediocre coach, I don’t know, but I do  what the Del Negro era proved the Bulls to be.