Are the Lakers still hungry?

After suffering through several lame suggestions by the press as to why the Los Angeles Lakers lost their second consecutive game one in these playoffs, Lakers coach Phil Jackson said,

“Here, guys, I’ll give you some help today. The game was won in the 3rd quarter when we got the lead and stopped playing defense — and stopped playing offense basically. We just took open shots, didn’t move the ball and didn’t work the ball around. All of the sudden, they are back in the ball game.”

Take a closer look at the 3rd quarter of this game.

The Lakers started the 3rd quarter strong: a layup by Artest, a dunk by Gasol, and a 3-pointer from Bryant, giving the Lakers a 16 point lead, and forcing the Mavericks to call time out.

That was when the Mavericks replaced DeShawn Stephenson with Corey Brewer, and the Lakers replaced basketball with blasé ball.

With the Mavericks on the ropes, instead of delivering the knockout punch, the Lakers shot 16 jump shots in a row, and grabbed only 1 of the next 10 rebounds! No wonder it was suddenly it was a 2 point game.

Talk about fake work! And yes, the Lakers have played plenty of blasé ball in the past, but the thing is, the Lakers were supposed to be better this season than they were last year.

o Andrew Bynum is healthier than he has been in years at this time of year.

o Jordan Farmar was upgraded to Steve Blake with his 9 points, 5 assists, 2 rebounds and great assist to turnover ratio.

o Josh Powell was upgraded to scrappy hustler Matt Barnes, who ranked 3rd in the NBA last season in rebounds among small forwards.

Moreover, everyone was writing that Lakers didn’t just upgrade in talent, but in toughness.

Or so we all thought.

If they gave away a 20-point, fourth-quarter lead to Sacramento in the regular-season finale, lost a 19-point lead to Utah, a 12-point lead to the Clippers and another 12-point advantage to New Orleans in Game 4 of their first-round series, why couldn’t they do the same thing to a Dallas team that matched their 57 wins this season?

Blasé ball starts at the top. I can understand Phil wanting his players to work out out, but not to the point of squandering a 16 point lead. During this melt down, Phil Jackson, who correctly diagnosed the problem in his post game interview, for some reason could not be bothered to get off his throne and call a time out to course correct his meandering flock. 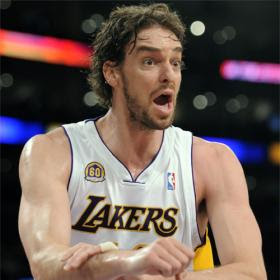 Then there is NBA All-Star Pau Gasol, an early season favorite for the NBA MVP award. Pau started the season averaging 25.3 points, 10.3 rebounds and 5 assists per game and shooting 52 percent.

That is such a drop in production, it is hard to believe those are the numbers of the same player in the same season!

Pau is so without mental toughness at this point of the season that he seems to get more worked up about officiating, or how he doesn’t get the ball, than he is with going and getting it himself.

I’ve always wondered what “Pau” meant. Apparently it is short for “Pout.”

Just watch Pau Gasol on the floor. He does not look like he is having fun, even when the Lakers are winning. Pau is playing without joy, and it shows more in his production even more than it does on his face.

Champions rebound. In last year’s championship playoff run, Pau was 4th among playoff players in rebounding (11.1). And they needed them too. Without Pau’s rebounds, the Lakers would not be champions.

This year in the regular season, Pau was 13th among all players in rebounds (10.3 per game). How has Pau elevated his game for the playoffs? By dropping to 24th in rebounding in the post season with (7.4 rebounds).

If you measured heart in rebounds, then right now Pau Gasol would be the Dick Cheney of playoff basketball.

I used to believe the Lakers needed to get the ball to Pau more often. After all, Pau shot 52 percent and was a team leader in assists (5 per game). Now I’m not so sure.

Pau’s lack of rebounding this year, particularly on the offensive glass, is part of the reason why he isn’t scoring as much. Again, that’s not to say the Lakers shouldn’t be getting the ball to Pau more, but it’s not like Pau’s efficient, aggressive play is inspiring awe in his teammates to the point where they feel they have to get him the ball.

Don’t get me wrong, the Los Angeles Lakers as a team are the 2nd highest rebounding team in the playoffs. But right now they are #2 despite Pau and Lamar, not because of them.

If you don’t think rebounding is critical to winning the playoffs, ponder this: 8 of the 9 teams with the least number of rebounds per game in this year’s playoffs have already been eliminated.

You may as well change the slogan from “Win or go home” to “Rebound or go home.” And with back to back championships under the belts, Pau and Lamar should not have to be reminded of this.

Of course the Lakers aren’t the only team in the playoffs that’s taken to playing blasé ball. In fact, 3 of the 4 of the higher seeds have lost their opening games this round.

But none of those other blasé ball teams are the two-time defending champions with significant roster upgrades.

The 2011 Playoffs have already become for me the Year of the Hungrier Teams.

Championship Basketball is a lot like shaving: No matter how good of a job you did yesterday, you have to get up and do it all again today.

Then again, looking at Pau, I’m not sure he understands shaving all that well.