Home / Articles / The NBA Lockout: Is it about the money? Or Pride?

The NBA Lockout: Is it about the money? Or Pride? If you were too look at each side’s position in a far, objective and factual manner…

NBA players do not want to take a drastic pay cut, and they do not want a hard salary cap. The players have made sizable concessions, including being willing to go from taking 57% of basketball related income (BRI) to 52.5%, a 4.5% drop.

NBA owners want to give all teams the chance to operate profitably, and compete for a championship. Owners want to share BRI at 50/50, and if they can’t get a hard salary cap, they want substantial penalties for going over it.

And to be fair, everyone wants the players to play — owners, players, and especially the fans.

The unemotional economics of the matter are these:

2. Over the last 2 years, those teams have been making cuts and putting in austerity measures.

3. Nevertheless, many of these teams are never going to be profitable until they can make substantial cuts to player salaries.

4. No business can exist indefinitely without making a profit.

2. NBA salaries have dramatically outpaced the cost of living over the last several decades.

All markets, including real estate, stock and labor markets, occasionally become inflated and require corrections from time to time.

The players seem to understand this as the players have already agreed to take a 4.5% reduction in pay.

But is more required? The owners say yes. The players say no.

And much to the dismay of the fans, instead of getting this resolved, the acrimony, misrepresentations and vilifying is sinking down to new levels. 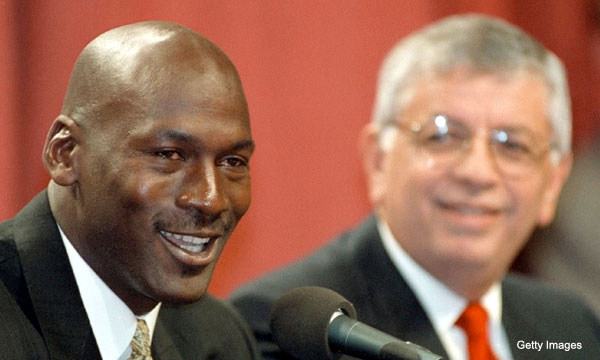 Michael Jordan, the owner of the Charlotte Bobcats, is currently being maligned by Jason Whitlock, the Darius Miles of sports writers, for “selling out” the NBA players and taking a “hard line” in labor negotiations.

For those who still have a grip on reality, the truth is (as reported by NBC sports) Michael Jordan’s Charlotte Bobcats are losing $7 million per year, and the Bobcat minority owners want out.

A locked out NBA isn’t exactly luring potential investors to the table to replace the bailing minority owners. But if the NBA ends up agreeing to a new collective bargaining agreement that doesn’t do enough to remedy deficit operations for the Bobcats, Michael Jordan could well wind up as the captain that goes down with the ship.

And with only 8 teams making a profit in the NBA, obviously Michael Jordan isn’t the only anxious team owner, he is just the face people recognize (and some sucker punch).

Some players claim that the reason for the losses is that owners are incompetent judges of player talent and potential, consequently these owners are bankrupting themselves by over-paying for some players.

It is startling, if not amusing, that players would make this accusation, given that this claim undermines their position in several ways.

First, this claim literally acknowledges that the core problem with profitability in the NBA is player pay.

Second, given that 22 out of 30 NBA teams are losing money, these players are virtually admitting that they agree that a frighteningly high percentage of NBA players are overpaid.

Third, this claim clearly confesses that giving players long, guaranteed contracts is unhealthy for the NBA.

Fourth, if a player is not performing as well after his new contract as he did before, how is that the owners’ fault? And how is it the owners’ fault when a player with a guaranteed contract suffers a career altering injury? Nearly all avid basketball fans have witnessed these all too common NBA phenomenons, so blaming owners for it, seriously,  just makes the players look unaware and unintelligent.

Besides, mocking owners for not having a crystal ball makes about as much sense as mocking players for not being able to dunk from the half court line. The expectation is, in and of itself unrealistic.

Look over an article of the worst current player contract decisions, and you will see names like Luke Walton of the Los Angeles Lakers, and Shawn Marion of the Dallas Mavericks.

Uh, that would be Shawn Marion of the World Champion Dallas Mavericks. Obviously, the people responsible for putting Shawn Marion on that roster are not wholly incompetent.

Likewise, the team that gave Luke Walton his contract was also the team that brought Pau Gasol to the Lakers… a move heralded by observers as genius, if not cheating.

The point is that it is impossible for even the very best teams in the NBA to assess players, therefore it is unreasonable to criticize all teams for not being able to do it either.

Moreover, the reason the Lakers were still able to win NBA championships despite overpaying some players is because they are a large market team that can afford to pay the luxury tax for exceeding the salary cap.

And the reason the Mavericks can succeed in spite of overpaying players is they have a billionaire owner who is okay with the team losing money for now because he figures the Mavericks are still appreciating in value.

In other words, with this claim, players are ultimately saying the owners are right: unless there are big changes in the collective bargaining agreement, large market teams have a substantial and unfair advantage, and small market teams are forced to lose money.

But actions speak louder than words.

When top tier small market players like LeBron James, Carmelo Anthony, Chris Bosh and Chris Paul long to leave their teams, do they bolt to the Utah Jazz or the Indiana Pacers? Or do they congregate in large markets like New York and Miami?

The players themselves, with their words and their actions, are confessing that the owners are actually right.

Basically, with the 50/50 proposition, NBA owners are asking for players to take an average pay cut of 7% so that teams won’t be forced to fold.

I get that players don’t want that pay cut, but it’s not like the sacrifice would leave them destitute.

As I’ve written before, in Michael Jordon‘s first 11 seasons, he won 4 NBA championships, 8 scoring titles and 4 MVP awards, all while being paid an average of $2.37 million a year.

Perhaps that’s why Jordan, now an owner, isn’t as sympathetic to the players’ position as they might hope.

Just contrast Jordan’s $2.37 million to LeBron’s James’s “sacrifice” of making “only” $14.5 million to play for the Heat.

Contrast that to Lebron getting a $90 million Nike contract, and a $5 million Upper Deck contract just for graduating high school.

And I have yet to meet a fan who believes center Kwame Brown, who has made about $51.5 million over the course of his NBA career, deserved to earn 7 times more than Kareem Abdul-Jabbar ($7 million lifetime NBA earnings).

I get that a 7% cut in pay isn’t fun, but seriously guys…

Players, you’ve already agreed to a 4.5% cut, so what’s the problem? Do you really believe that you can’t make do with another 2.5% reduction in pay?!

The thought that the whole 2011-2012 NBA season will be lost because players truly believe that they cannot get by with a 2.5% reduction in salary is so unbelievable that I cannot believe it.

There has to be something else.

You have to wonder: at this point, is this still about the money?

Or is it about pride?

Are the players too proud to eat humble pie, let the world know they “caved,” take the 50/50 offer and play ball?

After all, as the missed games pile up, the players will lose out on more than that 7% anyway, at least for this season.

But more importantly, the scorched earth NBA players are creating as they stubbornly “stand” against a 2.5% pay cut will certainly cost them more than 7% of their fans, and their associated revenue.

Come on players, swallow your pride and play ball!